Tonkatsu (とんかつ, “pork cutlet”) are thick slices of pork that are breaded and deep fried in a manner similar to German schnitzel. They are typically made from two cuts of pork: the lean and tender hire (ヒレ, tenderloin or filet) and the fattier rosu (ロース, loin). While tonkatsu is by far the most popular katsu dish, there are other variations made of chicken (chikinkatsu), beef (gyukatsu), ham (hamukatsu) and ground meat (menchikatsu).

Tonkatsu pieces are typically sliced and served in one of the following dishes: 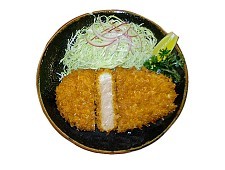 Tonkatsu
Tonkatsu are usually served as a set meal (teishoku) with shredded cabbage, rice, miso soup and pickles. Diners can usually choose which cut they want (hire or rosu) when ordering. The slices of tonkatsu are eaten seasoned with mustard and a thickened type of Worcestershire sauce (tonkatsu sauce), which can either be drizzled over the tonkatsu or poured on the side for dipping. 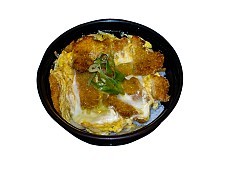 Katsudon (katsu ricebowl)
Katsudon (かつ丼) is a donburi (ricebowl) dish in which a sliced tonkatsu is cooked with a mixture of eggs and onions and served over a bowl of rice. 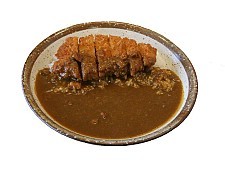 Katsu Kare (katsu curry)
Katsu curry (かつカレー) is a dish of Japanese curry rice topped with a tonkatsu. It is usually served on a large plate and eaten with a spoon instead of chopsticks. 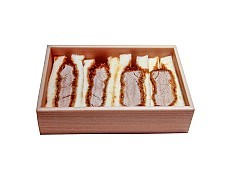 Katsu Sando (katsu sandwich)
Katsu sando (かつサンド) are sandwiches made of tonkatsu and shredded cabbage on white bread. They are often seasoned with tonkatsu sauce or mayonnaise. Unlike the above three dishes, katsu sando are not usually served at restaurants, but commonly available at railway stations and kiosks as take-away meals.