Nabe (鍋) is the term used to describe Japanese hot pot dishes as well as the hot pot itself. Nabe is a popular winter dish that is typically cooked and eaten at the table. Common ingredients found in nabe include vegetables, mushrooms, meat and seafood. The liquid in a hot pot is either a seasoned and flavorful broth, which cooks the ingredients and doubles as a soup base, or a simple and light broth, which is only used to cook the ingredients.

Popularly eaten at home, hot pot dishes are also served at some restaurants or as part of a ryokan dinner. When enjoying a hot pot dish, each diner gets a small personal bowl into which the cooked ingredients are scooped with a serving ladle. Depending on the nabe type, condiments like ponzu, grated radish (daikon-oroshi), yuzu kosho, mustard and shichimi are often provided. Diners can add the condiments to their bowl to personalize the final flavor to their tastes. 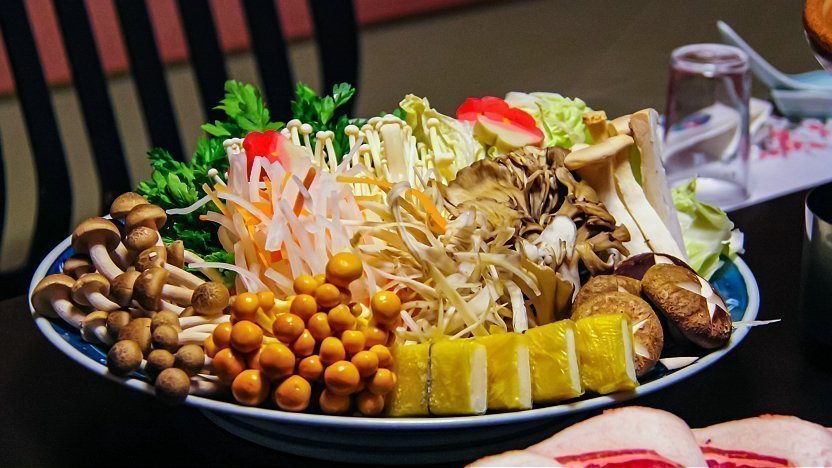 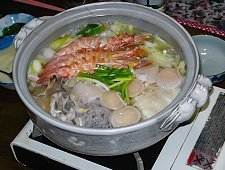 Yose-nabe
Yose-nabe is the most common and most basic type of hot pot dishes, served at homes across Japan. Vegetables, mushrooms, meat and seafood are cooked in a pot of flavorful broth. The broth typically contains water, sake, soy sauce, mirin and dashi soup stock. A common way to end a yose-nabe meal is to add raw eggs and cooked rice into the remaining broth, which would have become richer and more flavorful, to create zosui, a rice dish that has a thicker consistency than rice porridge. 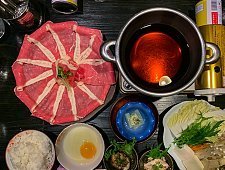 Sukiyaki
Sukiyaki is a hot pot dish featuring thinly sliced beef or pork with vegetables in a mix of soy sauce, mirin, sugar and water. The cooked ingredients are typically dipped into beaten raw egg before eating. Sukiyaki is served at restaurants that specialize in sukiyaki and shabu shabu dishes. 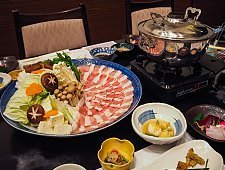 Shabu Shabu
Shabu shabu is a dish named after the sound of thin slices of meat being swished in the simmering hot pot. The broth is often very lightly flavored, sometimes just with kombu seaweed and dashi soup stock. All the ingredients except for the meat, which is either thinly sliced beef or pork (or sometimes raw seafood), are typically added into the broth. The meat is swished in the hot pot to cook just before eating. The ingredients are dipped into ponzu or a sesame sauce before eating. Shabu shabu can be found at restaurants that specialize in sukiyaki and shabu shabu dishes. 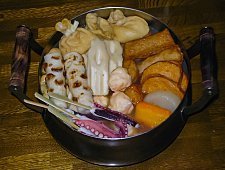 Oden
Oden is a hot pot of ingredients that have been simmered for hours in a light broth, which often includes dashi soup stock and soy sauce. The dish is a winter favorite, and many eat it to warm up in the colder season. Popular ingredients include daikon radish, eggs, konnyaku (konjac), various fish cakes and potatoes. Mustard is often provided as a condiment. Oden can be found at oden specialty restaurants and at convenience stores. 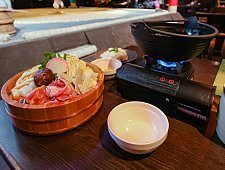 Chanko-nabe
Chanko-nabe is popularly known as the staple food of sumo wrestlers. The hot pot dish can have either a light or rich soup base, and regular ingredients include vegetables, seafood and meat. Chanko-nabe can be eaten with a variety of condiments depending on the flavor of the broth. Ryogoku, where the sumo stadium and many sumo stables can be found in Tokyo, is the home of many chanko-nabe restaurants operated by retired sumo wrestlers. 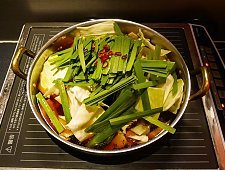 Motsu-nabe
Motsu-nabe is a hot pot dish containing pork or beef offal, vegetables and chili peppers in a soup base containing dashi soup stock and soy sauce or miso. Noodles are often added to the remaining soup to finish the meal. Motsu-nabe can be found all across Japan, but it is especially popular in Fukuoka.

Yudofu
Yudofu is a boiled tofu dish that highlights the delicate flavors of soft tofu. A light and clear broth, often times simply flavored with a piece of kombu seaweed, is typically used. The boiled tofu is dipped in ponzu before eating. Yudofu can be most easily found at tofu specialty restaurants in Kyoto.